At My Desk
Satima Flavell 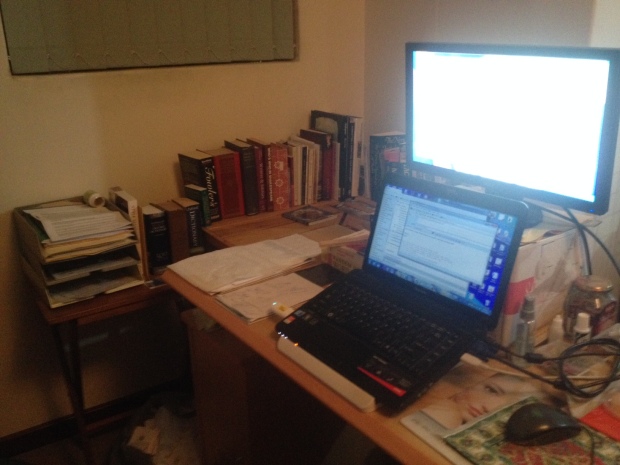 My desk is pretty boring. No flowers, no ornaments or pictures – just the necessary accoutrements of a writer: a computer that is always connected to the internet and essential research books close to hand. The only interesting thing is the mouse-pad. It’s a copy of a Turkish rug. My sister brought it back from a European trip. It’s so pretty I wish I could hang it on the wall but can’t figure out a way to do that, as it has a soft foam back and a fringe and there’s no way to hang or frame it without damaging or losing one of those essential features. Besides, it’s a very fine mouse-pad!

Did I say there were no ornaments – there is actually a little lucky elephant who lurks by the computer. I coaxed him out to have his photo taken on the mouse-pad. Maybe he whispered in the ears of my publishers at Satalyte, persuading them to take on my novel, The Dagger of Dresnia. He must have whispered the right words, for not only did Satalyte want this book but two more that will make up the trilogy. Each one will be a stand-alone story, though. I was delighted when Satalyte took on The Dagger of Dresnia because I’d only had poems and the odd short story published before. One short story, La Belle Dame, is still available in a Kindle version. It’s in a little anthology called Mythic Resonance (Stephen Thompson, Ed.) which you can find on Amazon.

There’s a bookshelf to the left of my desk where you can see some of the works of my favourite authors. It’s a big, cumbersome brute of a thing with books stacked in piles rather than standing upright as good honest books should. At one time, they did stand in orderly rows, but one day the whole thing toppled over and rained books onto me, the desk and the floor. Luckily I was able to catch it in time and shove it upright, and got a sore back for my pains. The way it’s loaded and positioned now, it should be safe. I hope those aren’t famous last words!

Any fiction I write is likely to have a historical setting. I love history and I love the classic medieval fantasy world, so that’s where my works are usually set. I like it to be as genuinely historically accurate as possible, though, apart from the magical elements, so I keep a few history texts close by. I also read good historical authors such as Elizabeth Chadwick and Bernard Cornwell. Also on the big brute bookshelf are works by favourite modern fantasy authors, including Ben Aaronovitch, Joe Abercrombie, Jacqueline Carey, Neil Gaiman, Guy Gavriel Kay, Margot Lanagan, Glenda Larke, Juliet Marillier and Marianne de Pierres. Sometimes I take them out onto the balcony, which has a lovely sunny aspect, especially enjoyable on nice days in winter.

Now I’m busy with The Cloak of Challiver, book two of The Talismans, so if you’ll excuse me I’ll get back to my desk! Come visit me on my blog <http://satimaflavell.blogspot.com.au/>or find me on Facebook and Twitter. You can read a sample of The Dagger of Dresnia on Amazon (P.S.: isn’t Marieke Ormsby’s cover just gorgeous?

4 Comments on AT MY DESK: Satima Flavell 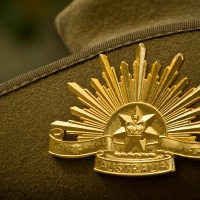 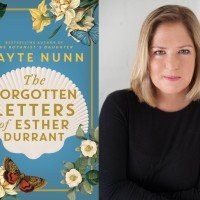