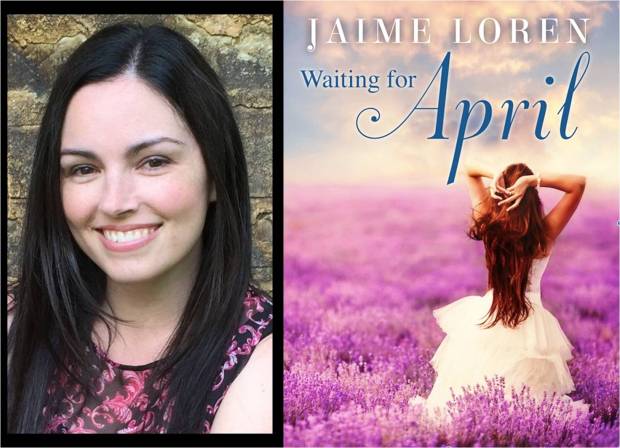 MEET MY MUSE with Jaime Loren

Firstly, I’d like to say thank you for having me back! As the post topic suggests, today I’ll be talking about who and what inspires me to write.

My debut novel, Waiting for April (Momentum Books, 2015), began as whisperings in my ear. “You have to write something. You don’t want to be that old lady who wishes she’d chased her dreams instead of believing she’d never achieve them.”

Usually, this was at night while I was trying to sleep, but as time moved on, it became a thorn in my side at all hours. “You were supposed to write a novel in this life! You’re wasting time here, woman!” (Yep, my muse is pushy!)

As most writers know, writing isn’t usually something you choose to do. It chooses you. So, figuring I should listen and take advantage of the fact I was on maternity leave, I decided to take the plunge and follow my dreams—properly, this time.

I’d started so many books in the past, but had gotten bored within the first twenty pages. Thankfully, my muse felt strongly enough about this particular book to make me slow down and let the idea marinate for a month before I started writing it. This idea felt different right from the start, and I knew I had to coax it out gently rather than slam it down on the page at the first opportunity.

For inspiration, I often turn to photographs. I Google map locations, I build the houses in computer games such as The Sims (yes, I’m a geek), and I like to ‘cast’ actors as my characters. For me, Jesse Spencer and Isla Fisher were my Scott Parker and April Fletcher. Jesse has that wholesome ‘boy next door’ appeal going on, and Isla is definitely the delicate-yet-feisty red-headed female worth fighting for. Now, if I struggle to find inspiration for a scene, I’ll find a photo of either of them and it’ll put me in the mood to write. I have certain photographs that set the mood for certain chapters, and that works really well.

If I’m having a particularly bad writing day, my muse will also throw music at me. Scott, in particular, has a set list. He’s a musician in the novel, so I find I’m very driven by music when I’m writing in his perspective. John Mayer is a regular on the list, as are The Script and Extreme. Honestly, if my muse offers up anything with an acoustic guitar, I really have to get to my computer ASAP!

At this stage of my career, I find that I know my characters in this series so well, my muse is almost in semi-retirement. Scenes don’t take as long to write, and my imagination is so much richer when it comes to the small stuff, like furniture and scents, for example. It’s as though my muse has trained me up so that she can take a backseat for a while—or at least until my next project pushes its way in.

Another thing I’ve learned about myself during this whole process is that I was always supposed to be a writer. Always. It didn’t matter that I went and got two different university degrees, or that I worked in a dozen different ‘real’ jobs—I never felt like me until I sat back down to write.

I hope you all enjoy Waiting for April as much as I enjoyed writing it! I’ll leave you with the blurb to whet your appetite!

April Fletcher has died nineteen times… but she doesn’t know it.

As far as April is concerned, she’s just a normal seventeen-year-old, looking forward to spending spring break with her friends and going to college in the fall. April doesn’t know she has never lived past her eighteenth birthday, nor does she realize that Scott Parker, her best friend, is actually her childhood sweetheart and fiancé from her very first life.

For nineteen-year-old Scott Parker, spending quality time with his soul mate has proved difficult ever since her tragic death in 1729. Since then he has lost her an additional eighteen times—each of her deaths more devastating than the last, and each of her births wiping the slate of her memory clean. Unable to save her but unwilling to give up, Scott has to hide the fact he’s immortal—and will be until April confesses her love again.

But this time, things have changed. April has denied her feelings for him, is dating someone else, and with her eighteenth birthday fast approaching, their friendship is falling to pieces. Fearing their souls are irrevocably drifting apart, Scott must race against the clock to win her heart and save her life.

Or risk losing her forever.