Describe yourself in one word:
Open-minded

Tell us about Splinter:
My debut novel, Splinter, was released in early December. It’s a paranormal romance novel which follows the story of Rachel Fallon, the world’s most stubborn sceptic, and Nick Hunter, the splinter-hopping Mythic Warden who must convince her magick is real. Please note: Flaming trees, mad vampires, backyard fireworks, and love scenes hot enough to set the sheets alight are also included for your reading pleasure.

What inspired this novel?
As I looked into a mirror one evening, a thought occurred to me: What would I do if I saw something in the reflection that shouldn’t be there? Before long my very ordinary mirror had transformed into a gateway to an alternate splinter of reality, where the use of magick is a valued skill and all manner of mythical creatures roam the streets at night. Splinter, was born.

What are you reading right now?
I’ve just finished Inconsolable by Ainslie Paton, which was a wonderfully emotional book and I’m about to dive into Nalini Singh’s Rock Redemption.

Number one thing to do on your bucket list?
I want to see the aurora borealis with my own eyes. That would be truly amazing.

Best thing about being an Aussie?
The people! When we’re at our best, Aussies are a generous, caring bunch who are open to new things and don’t take ourselves too seriously.

What you want readers to know about the romance genre?
I think one of the greatest strengths of the romance genre is how diverse it is. Romance can be written in its purest form, or it can be mixed with any other genre in existence. It can be anything from sweet to scorching. No matter what else is happening in the world, people will always find a way to fall in love and that truth if the very foundation of the romance genre.

What were your big achievements of 2015?
As a writer, publishing my first novel easily tops the list. Now, I’m looking forward to everything that 2016 has to offer.

Rachel Fallon has inherited the estate of her grandmother, Maddie, and believes she’s finally found a place to call home. That is, until a terrifying experience convinces her Maddie’s death was no accident, but murder. Now, her search for answers will uncover a world brimming with magick, where vampires are real and thirsty for blood.

Nick Hunter has left behind his own splinter of reality to follow Maddie’s killer to this place of disbelievers, where people have not learned to fear nightfall. Despite his difficulty accessing the magick here, Nick is determined to find the vampire and put an end to his madness.

Rachel’s presence is both a complication and an all too tempting distraction, even with the force of the magick she unknowingly possesses. When she becomes the focus of the vampire’s attention, Nick and Rachel must work together to stop him. But as the flames of desire burn hot between them, the truth about the night Maddie died threatens to destroy them both. 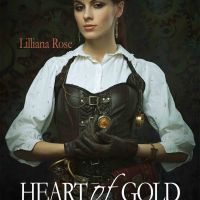