Describe yourself in one word:
Storyteller

What is your background with regard to writing?
My writing career has included publication of travel articles and short stories, as well as novels of women’s fiction and romance. Inheritance a rural romance is published by Escape Publishers and I have published the Redwoods trilogy, a trio of romantic stories of Australian historical fiction titled:

Book One, An Independent Woman.

All are available from Amazon and other retailers as both ebooks and paperback.

I have also recently published a non-fiction book about healthy eating and weight loss, including recipes, titled Eat Cook Slim

Tell us about An Independent Woman:

An Independent Woman tells the story of Kitty Morland a young woman in England in 1878, who steals diamonds from the man she holds responsible for her father’s ruin and subsequent death.  Taking her mother she flees to Australia to join her brother Robert. She meets William Barron, a young aristocrat, and Rufe Cavanagh, an entrepreneurial Colonial who operates stores on the goldfields.  When she learns her brother has been killed, Kitty marries William for security and moves to Redwoods, a logging property in Bulahdelah, in spite of warnings from Rufe that she will be unhappy. His predictions prove true, but when William is drowned it leaves her alone to give birth to a daughter and manage the timber-cutting business.  The story continues as Kitty determines to create a successful future for herself and daughter, and her battle to succeed in spite of opposition from the chauvinistic males of the era, and her relationship with Rufe. The ending is one of hope for the future and Kitty’s and Rufe’s relationship is continued in the next book in the trilogy.

What inspired this novel?
I always enjoy learning the history of places I visit, and while living on the beautiful mid-north coast of New South Wales, I researched the past of Bulahdelah, a picturesque village about 200kms north of Sydney on the Myall River. This made me curious about the lifestyle and conditions for all women in the nineteenth century .What my research found was that women then had few rights and were dominated by the men of the time. The law in that era stated that when a woman married, all her assets became her husband’s property, and the law gave him the right to force her to obey him in every area of her life.  This meant she was totally dependent on him for everything, both financially and emotionally. If he turned out to be heartless, violent or miserly, she had little or no recourse. Women were considered to be physically, emotionally and intellectually inferior to men, and the entrenched and patronising attitudes of the time meant that the judiciary, all male, took the view that whatever the man did was right and a woman was meant to be an obedient homemaker and bedwarmer for her husband, while not expecting sexual pleasure herself! But there were women who had the spirit to rebel against this injustice – women who refused to be browbeaten by the men?  And if they defied custom – could they face the results of going against the conventions of the day? Happiness – and love – could not have been easy! It was these findings that incensed me, and provoked me into writing An Independent Woman and the Redwoods series.

What are you reading right now?
The Great Plains by Nicole Alexander

Number one thing to do on your bucket list?
Spend some time exploring the top end of Australia (and hopefully pick up ideas and a great location for a new book)

Best thing about being an Aussie?
To live in this wonderful, diverse country that I love, and the freedom to enjoy it with like-minded individuals.

What you want readers to know about the romance genre?
A romance story is a little slice of life that lets you join someone else on their journey to find love and happiness, to share their disappointments when all seems lost, and their happiness when it all ends Happily Ever After .

What have you got in store for your readers in 2015?
I hope to see publication of my new book ‘Black Mountain’ a contemporary romance set in north Queensland, and I also hope to finish my current work in progress, provisionally titled ‘If the Shoe Fits…’.

What were your big achievements of 2014?
To see Inheritance reach #14 in the Kindle ‘best contemporary romance’ category,  to publish the final book in the Redwoods trilogy, A Modern Woman and to finish my new book Black Mountain and submit it to my publisher.

It is often a spur-of-the-moment decision that can become a turning point in life.

So it is for Kitty Morland, a young woman in London in 1878.

When she yields to temptation one fateful day the consequences of her action force her to flee to the other side of the world, to the small timber town of Bulahdelah in the mid-north coast of New South Wales, home of the giant cedar trees.

Beautiful and spirited, Kitty needs all her courage and determination to survive the ordeal of marriage to a bullying husband, but when she has a chance for love and happiness she must make a difficult decision. 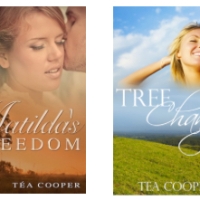