We’ve set the challenge to Australian romance writers… using the above ‘menu’, you’ve got $10 to build us what you consider to be the *perfect* story…. Can it be done? Narrelle Harris shows us her way!

A delicious dish I like to savour involves soul-mates finding each other at last, healing from past hurts and overcoming external obstacles to embrace a brighter future. A great variation on this recipe is having the soul-mates not realise that they are soul-mates, and having to overcome some internal obstacles as well.

Today I am compiling a classic dish of Sherlock Holmes and John Watson, served as a romance pie, Australian-style. This dish has been with us, with variations, for 128 years, and can be enjoyed in many ways and adapted for all eras, seasons and tastes.

My version of this classic is called The Adventure of the Colonial Boy, set in Melbourne and Victoria of 1893. Among the obstacles Sherlock Holmes and John Watson need to overcome to make the Requited Love Pie are the prejudices of the times, difficult personal histories that predate their friendship, and some nasty new self-made ones – primarily that Watson went off and married Mary Morstan, and Sherlock Holmes faked his death at the Reichenbach Falls.

The Chef Special ingredient ($6) that I requested especially for this pie is the resolution of a complicated, unrequited love. Key additional ingredients are the unbreakable connection between lovers ($1) and an emotionally charged love affair ($1).

The latter is a bit of a surprise ingredient, as these two men’s strengths have previously been logic and intellect on one side, and courage and loyalty on the other. But of course, it’s that emotional ingredient that is the undercurrent of their long history. All the variations on the Holmes-and-Watson recipe are down to how much or how little of the emotional charge is added in the preparation stage.

The external obstacles give the Requited Love Pie a lot of texture. These include past grief, fear of rejection and some fairly significant failures to see and/or observe. Other flavoursome obstacles include various attempts on Watson’s life, a fugitive being pursued both by Holmes and by a murderous confederate of their old enemy, Moriarty, and the horrific role played by a repulsive red leech in several awful deaths. Australia’s notoriously dangerous wildlife gives the love pie a piquant, gamey flavour too.

There’s nothing like adrenalin and a whiff of angst to make the blissful ending that little bit sweeter.

Holmes and Watson are men of action, but in this recipe, the nature of their deeply emotional bond is best expressed with a dash of sweet, sensual lovemaking ($2). This way they (and we) get to savour the culmination of all those years they’ve waited for each other.

It gave me a lot of joy to reinterpret this 19th Century recipe, and I hope that those who love Holmes and Watson find the Holmes/Watson Requited Love Pie stimulating and refreshing to the palate. 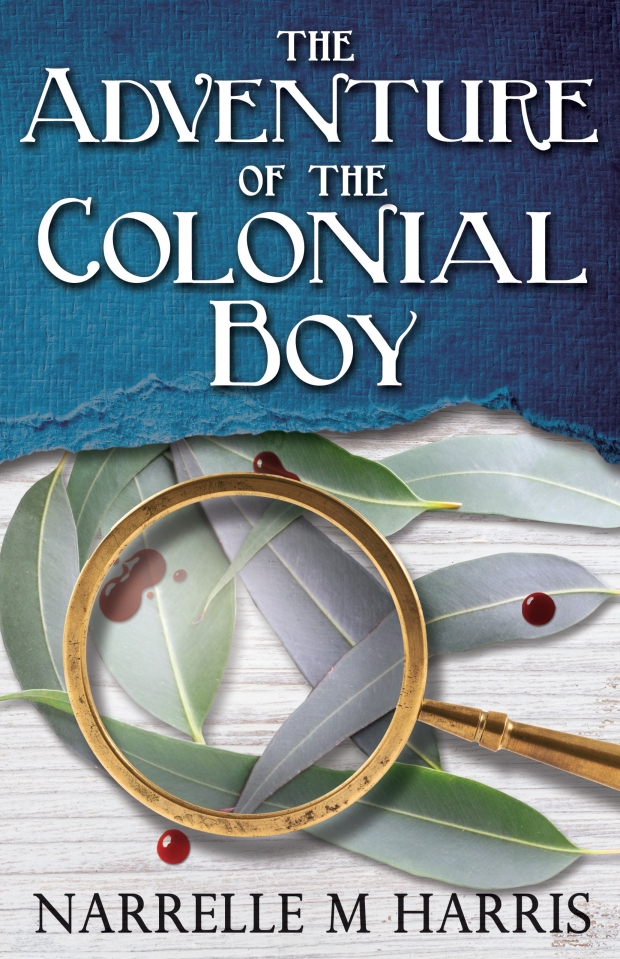 The Adventure of the Colonial Boy
Narrelle M Harris

Dr Watson, still in mourning for the death of his great friend Sherlock Holmes, is now triply bereaved, with his wife Mary’s death in childbirth. Then a telegram from Melbourne, Australia intrudes into his grief:

“Come at once if convenient.”

Both suspicious and desperate to believe that Holmes may not, after all, be dead, Watson goes as immediately as the sea voyage will allow. Soon Holmes and Watson are together again, on an adventure through Bohemian Melbourne and rural Victoria, following a series of murders linked by a repulsive red leech and one of Moriarty’s lieutenants.

But things are not as they were. Too many words lie unsaid between the Great Detective and his biographer. Too much that they feel is a secret.

Solve a crime, save a life, forgive a friend, rediscover trust and admit to love. Surely that is not beyond that legendary duo, Sherlock Holmes and Dr John Watson?

2 Comments on BUILD US YOUR IDEAL STORY with Narrelle Harris